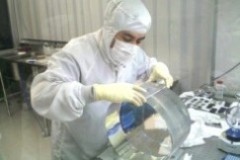 LIGO commissioners have completed another significant test of Advanced LIGO hardware and software, the half-interferometer test along the Y arm of LIGO Hanford's H1 detector (HIFO-Y). A previous note outlined the results of the one arm test on H1. LIGO commissioners used HIFO-Y to clean up some unfinished business from the one arm exercise and extended the test to include H1's recently installed input optics and arm length stabilization (ALS) sensors. 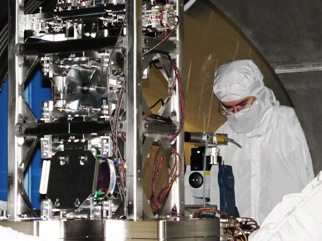 The one arm test (performed on the Y arm of H1, as was HIFO-Y) used only a 532nm green laser beam, injected into the end of H1's Y arm and synchronized to an auxiliary laser in the site's corner station via a 4km optical fiber. HIFO-Y added the 1064nm infrared light from the interferometer's main laser, both as an input beam to the interferometer and as a frequency reference for the end station green laser. Commissioners resonated both frequencies of light in HIFO-Y, establishing the ability to control a frequency offset between the two beams at the level of 10Hz. Test results also indicated that both frequencies, once resonating in the long arm, remained stable at the 10Hz level against cavity noise below 0.5Hz. The use of the highly stable main laser as a synchronization source for the green beam provided improved noise performance over the one arm test, as expected. The full set of ALS-related HIFO-Y results indicated that at present LIGO faces no potentially show-stopping issues on the path to developing a fully automated lock-acquisition scheme for the long arms. At both sites LIGO will finish the installation of each arm, test each arm individually (i.e. HIFO-X will follow on the heels of HIFO-Y at LIGO Hanford), and then test both arms and the input optics simultaneously.

Months of installation and alignment activities always precede LIGO's tests of new optical cavities. The top photo shows an Advanced LIGO initial alignment specialist verifying the postions and angles of a set of installed optics through precision surveying in the spring of 2013, prior to HIFO-Y. Below, the wrapped vibration isolation platform and beam splitter suspension (a cartridge) moved up the central portion of the detector's Y arm near the same date to its home at the interferometer vertex. The investment of time in high-precision installation pays big dividends later -- watch the smiles on Advanced LIGO commissioners' faces when they open a long arm to the beam and note its reflection on the target optic 4km away. 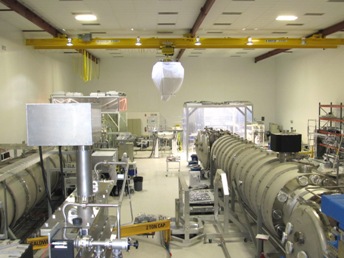 HIFO-Y provided a good road test for ALS components and it also afforded commissioners the opportunity to examine nearly every Advanced LIGO subsystem that will operate in the interferometer: The pre-stabilized (main) laser, input optics, HEPI (the hydraulic external pre-isolator), internal seismic isolation, large optics suspensions, TCS (thermal compensation) and optical levers. Not all of these subsystems have obtained completion, but they were complete enough for HIFO-Y that the commissioning team was able to probe their performance and gather data that will inform the remainder of the aLIGO schedule.